Linda Quist from Seattle, US remembers the years in the 60s and 70s when she and the group of American singers, dancers and musicians, all of them in their twenties and thirties at the time – loved to visit Croatia, Serbia, Macedonia, Bosnia-Herzegovina (former Yugoslavia at that time), and other neighboring countries.

They would bring with them American folk music, and while visiting learn the folk music, dances and customs of their hosting countries. Soon their repertoire was enlarged by the Croatian, Serbian, Bosnian, Macedonian, Bulgarian, Greek and Turkish folk music and dances. Linda is especially fond of her group’s performances at the Croatian festivals of traditional folk music in Zagreb and Djakovo, known as Medjunarodna smotra folklora (International Folklore Festival) and Djakovacki vezovi. 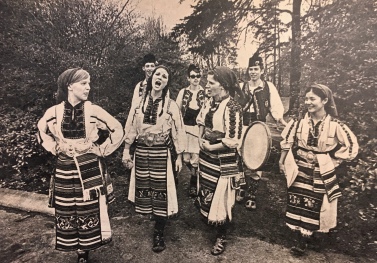 In 1975 the group released an LP album with their interpretation of a number of Croatian traditional folk songs.

Today Linda continues to visit the region, especially Croatia, Bosnia-Herzegovina and Montenegro, as the director of the Seattle based Balkan Task Force that supports several faith-based initiatives in those countries. She is also an adviser to the Forum for Leadership and Reconciliation, a Seattle based leadership and reconciliation organization with the international work focused on leadership development, peace building and reconciliation. Take 15 minutes and listen to Linda’s story.

Developing leaders transformed by the person of Jesus in a divided world, inspired by His words: “Whatever you did to the least of those, you did to me!” Matthew 25:40.

YES, Friends, we want you to join us in this milestone celebration of friendship, transformation, service, God’s leadership and grace that has followed the history of the Renewing Our Minds (ROM) mission and its community of friends for the past 20 years. You are a blessing, fruit and beauty of this movement. Whether you were part of ROM in its early days, or only recently, or any time in-between; or whether you attended only once, or served as a mentor, speaker, facilitator or team member, we would like you to join this big family gathering of friends, visionaries and caring leaders. Consider this informal invitation as an incentive and priority, follow our updates, and if you have been part of ROM in any capacity over the past 20 years expect to receive the official personal invitation any day now. But let us know you are intending to come, and save the dates and place: 29th July – 5th August, 2019., Hotel Klimetica, Ohrid, Macedonia.